For our well attended November meeting we had the pleasure of welcoming Will Boyce, Dementia Patient Champion from the charity Approach Staffordshire. He was pleased to find that our group is now registered with Dementia Friends.

Will gave an inspirational talk drawn from his own experience and from working with other Dementia Friends. As well as engaging us in discussing of various forms of dementia such as Alzheimer’s, Vascular and Frontotemporal Lobe dementia, he showed us images of a healthy brain compared with one seriously affected by dementia. He ended on a positive note that showed ways of helping people with dementia and their carers to live well with the condition.

Zoe and Andrew from GayLife Stoke, and familiar faces to many of our members, gave a short presentation about HIV Testing Week. GayLife runs weekly support groups for the Lesbian, Gay, Bisexual and Transgender (LGBT) Community at the Piccadilly Centre. GayLife also provides sexual health information, including information on safer sex and Sexually Transmitted Infections (STIs).

To show our support, a few of us agreed to have a group photo holding placards prepared by Zoe and Andrew 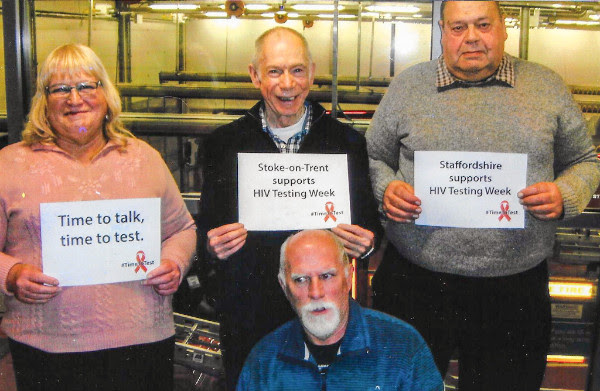 The Candlelit Vigil in Hanley for World AIDS Day is organised by Staffordshire Buddies with a set of readings based on the latest facts and figures. This year was especially significant for the Charity because Staffordshire County Council ended their contract on 1 December 2016. This has resulted in staff redundancies and cuts in all HIV support services to Staffordshire Buddies clients living in the county outside of Stoke on Trent. At present support services in Stoke on Trent remain unaffected. 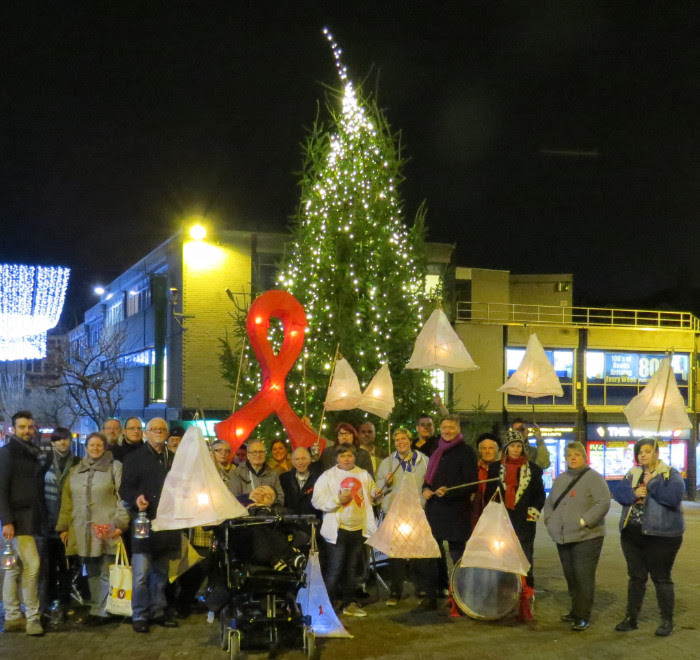 There was a good turnout with a procession from the Piccadilly Project led by a giant red ribbon lantern and accompanied with real live music. A first!

After the vigil readings and balloon release, some of the participants posed for a group photo in front of the Fountain Square Christmas Tree.